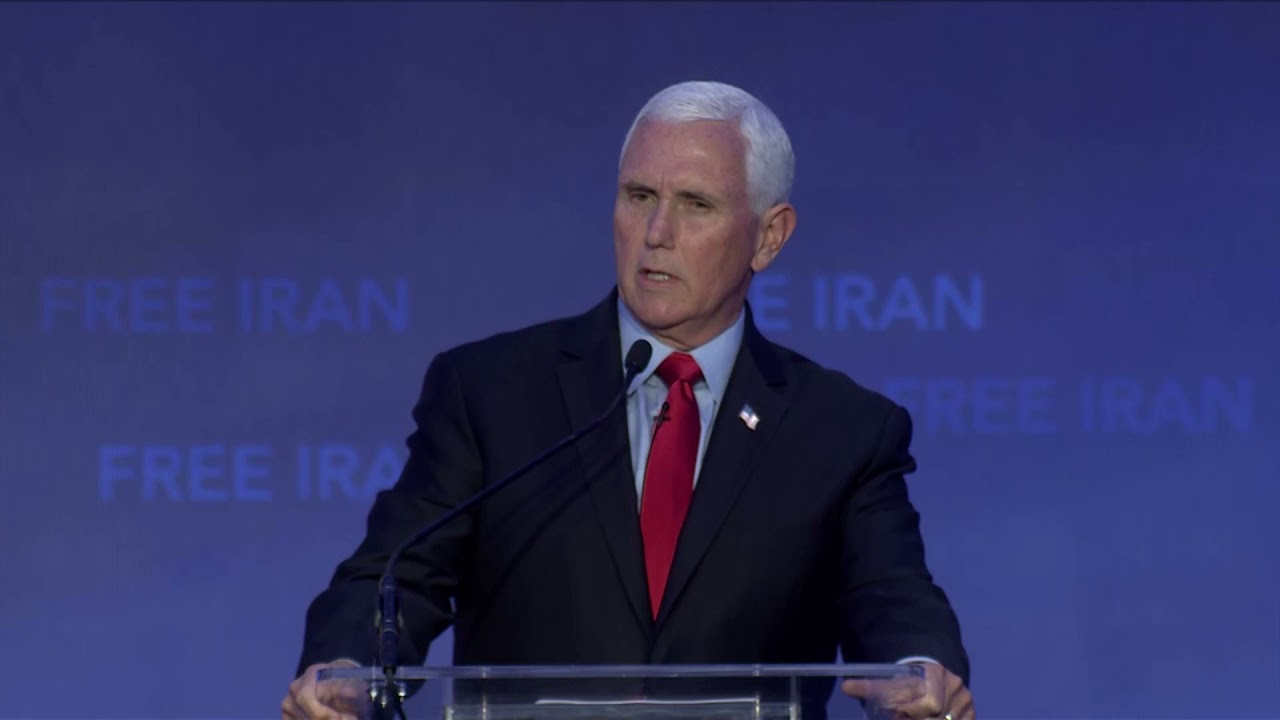 Thank you. I am truly honored to address the Free Iran 2021 conference. Today, thousands of freedom-loving people from the United States, Europe, Iran and nations around the world are joined together in pursuit of a common cause: the liberation of the Iranian people from decades of tyranny, and the rebirth of a free, peaceful, prosperous and democratic Iran.
I want to thank you for the outstanding work you are doing to promote a free Iran. Thank you all for continuing to stand strong in the name of freedom.
This is the first opportunity I’ve had to speak at length about Iran since completing my term as Vice President. And while I no longer speak on behalf of the U.S. government, I do speak with confidence regarding the views of American people……..
As a former elected leader, as an American citizen, and as a man of faith who believes that all people are created in the image of God, the Iranian people have always had a special place in my heart.
In 2009, like so many other Americans, I remember watching with great hope and anticipation as the people of Iran began rising up to claim their birthright of freedom……
In the 2009 uprising, millions of courageous young men and women filled the streets of Tehran and Tabriz, and what seemed like every city and village in between. They denounced a fraudulent election, and demanded an end to decades of repression.
Those brave protesters looked to the leader of the free world for support. But as I saw first-hand as a member of Congress, the president of the United States stayed silent.
As a member of the House Foreign Affairs Committee, I recognized that lack of action for what it was: an abdication of American leadership…
We imposed crippling new sanctions on Iran’s Islamic Revolutionary Guard. We launched a campaign of maximum pressure, punishing the regime for its belligerent behavior and assault on its own citizens. We vigorously enforced sanctions to bring Iran’s oil exports to zero and deny the regime its principal source of revenue.
We called on the free nations of the world to stand with us and with the Iranian people. We encouraged world leaders to condemn Iran’s unelected dictators and defend the Iranian people’s unalienable right to chart their own future and determine their own destiny….
We confronted the regime’s malign activity across the region. And we didn’t hesitate to take decisive actions to stop the world’s top terrorist – the head of the Quds Force, Qasem Soleimani.
On the day we left office, the Iranian regime was more isolated than ever before…..
The Iranian regime has never been weaker than it is today. Its economy is in shambles. The inflation rate has skyrocketed. Iranian currency has lost 90 percent of its value. Four out of five Iranians now live below the poverty line. Corruption is at an all-time high. The Iranian people are fed up, and ready for change.
The recent selection of Ebrahim Raisi to serve as Iran’s president is a sign of the regime’s growing weakness and desperation. 30 years ago, Raisi was in charge of the Ayatollah’s death squads. He is a brutal mass murderer responsible for the 1988 massacre of 30,000 political prisoners. His selection as president is intended to quash internal dissent and intimidate the people of Iran into remaining silent……
Today, we join you in pledging that his crimes must not go unpunished. Ebrahim Raisi must be removed from office by the people of Iran – and he must be prosecuted for crimes against humanity and GENOCIDE.
Today, the resistance movement in Iran has never been stronger. Resistance Units in Iran are the center of hope for the Iranian people. They are an engine for change from within during the uprisings and continued protests. We stand unequivocally on the side of the Iranian people and their Resistance Units.
One of the biggest lies the ruling regime has sold the world is that there is no alternative to the status quo. But there IS an alternative – a well-organized, fully prepared, perfectly qualified and popularly supported alternative called the M.E.K.
The M.E.K. – led by Maryam Rajavi – is committed to democracy, human rights, and freedom for every citizen of Iran. Her Ten Point Plan for the future of Iran will ensure freedom of expression, freedom of assembly, and the freedom for every Iranian to choose their elected leaders.
Our greatest hope must always be for a peaceful, cooperative and harmonious co-existence with Iran and all the sovereign nations of the world. The United States must always be ready to embrace peace with all who seek it……..

Excerpts (Due to space limitation)